“My mom used to take me to see the Subhumans when I was twelve.”

“Does this button say ‘Subhumans’?  I’m lost without my reading glasses.”

We held off announcing the release of our new CD for quite a long time for no really good reason, except maybe a general feeling that there’s many a slip ‘twixt the cup and the lip, and the best-laid schemes o’ mice an’ men gang aft agley.  We waited until we had a definite release date, all the music and grpahics in the hands of the label, the manufacturing schedule all set, all that.  Everything was set in stone, or maybe welded up in high-grade steel, great, time to let le chat out of le sac.  September 28 for sure.

Oops.  Seems Alternative Tentacles got caught out when their usual CD pressing outfit closed down.  They had to take their schedule apart and reassemble it, and the new release date for “Death Was Too Kind” is November 11.  For sure.  Really.  No kidding.  You can take that to the bank, which will probably be out of business by the time you get there. 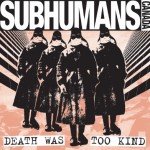 Recently a thoughtful correspondent (thanks, Trent) pointed out that Vancouver’s normally-upright Zulu Records had some copies of a re-issue of the our 1979 EP in their window, a re-issue that included some extra tracks from our early singles as well. First we’d heard of it. Some inquiries revealed that the bogus disc was being distributed locally by Vancouver’s normally-upright Scratch Records. Further inquiries resulted in Scratch telling us that the counterfeits came from a European distributor who they cravenly refused to name. Apparently they traded some of their product for the pirated EPs so there was no possibility of them withholding payment for them. And their stock was all gone, anyway. Oh, and they made some weak-minded comment about how if we’d re-release our stuff ourselves then nobody would bootleg it – as if the pirating was somehow our fault.

(We’ll fill everybody in some time about just why we haven’t re-released our older stuff yet – another tale redolent of sea air, bottles of rum, etc.)

This follows by a few months the appearance of a bootleg CD of “Incorrect Thoughts” from another band of villains going by the name “Punk Vault.” Also European, apparently.

Zulu made the comment that they “didn’t know it was a bootleg.” Yeah, right. Other music-store personnel who are similarly brain-fogged are invited to visit the discography page at our website (www.subhumans.ca) which has a listing of all of the actual real official releases of our stuff that have ever occurred. If it ain’t on there then it ain’t fair and square.

If anybody else hears of any other supposedly-legit outlets dealing in this stuff, please drop us a line.

More Good News From the Front!

The Lancet, one of the most prestigious medical journals in the world, has just published a study on mortality rates in Iraq since the 2003 US-UK invasion. The same authors published a study in 2004 which estimated deaths since the invasion to be in the range of 100,000 at that time. Despite its rigor, that study was attacked with much vitriol by defenders of Western imperial aggression. The new study, which is based on a larger (and hence more reliable) sampling of Iraqi households, finds that the rate of violent death is continuing to rise: “We estimate that as of July, 2006, there have been 654,965 (392,979 – 942,636) excess Iraqi deaths as a consequence of the war, which corresponds to 2·5% of the population in the study area. Of post-invasion deaths, 601,027 (426,369 – 793,663) were due to violence, the most common cause being gunfire.” The 654,965 figure is considered to have a 95% confidence level.

The actual study is available online. It’s only eight pages long, no complicated equations. Go ahead, read it, I double dare you.

Like the earlier study, the new one will be dismissed by those responsible for the invasion because it extrapolates from a sample to the whole population, and that’s sort of sciencey and can be scoffed at. The research team gathered data from “1849 households that contained 12,801 individuals,” asking who had lived there before the invasion and who lived there now, and accumulating all the explanations for the difference: migration, births, deaths from natural causes, deaths from violence. Death certificates where examined for 92% of the reported deaths.

And on that cheery note, we’re off on tour!